Register for more free articles. Sign up for our newsletter to keep reading.

Be the first to know

Get local news delivered to your inbox!

Back to homepage
Subscriber Login
Please subscribe to keep reading. You can cancel at any time.
Loading&hellp
You are the owner of this article.
Edit Article Add New Article
You have permission to edit this article.
Edit 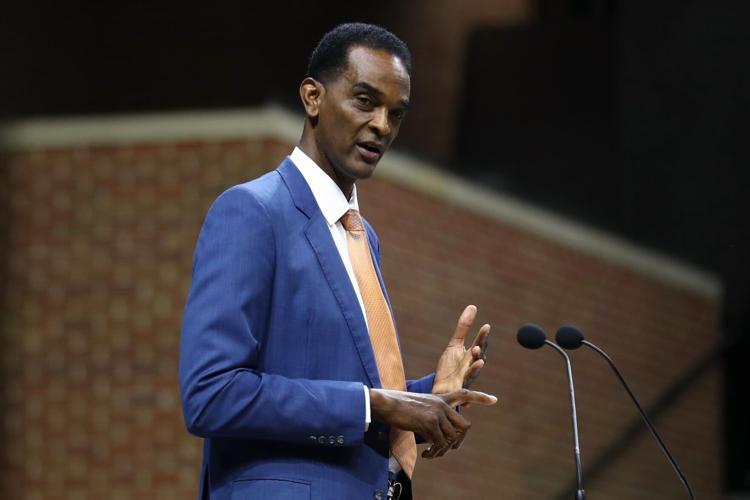 UVa basketball legend Ralph Sampson spoke at Valediction on Friday, telling students to stay motivated and connected to the school and the community. 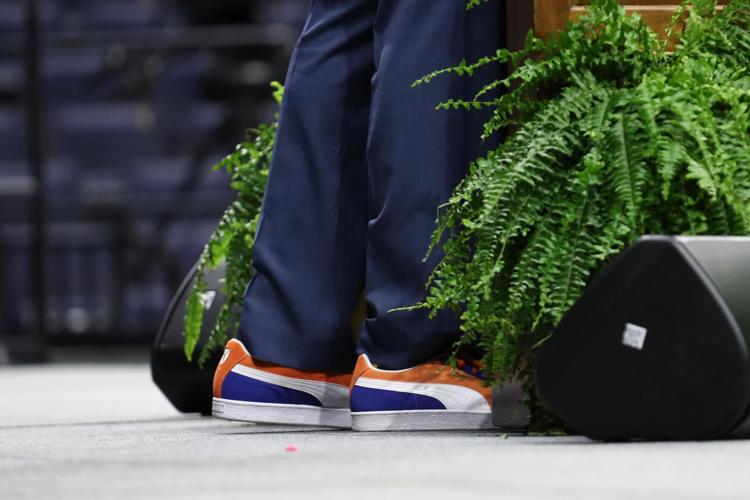 UVA COMMUNICATIONS The shoes that took the UVa Cavaliers' men's basketball team to a title made their second-ever appearance on the feet of hoop legend and Valediction speaker Ralph Sampson at UVa on Friday. 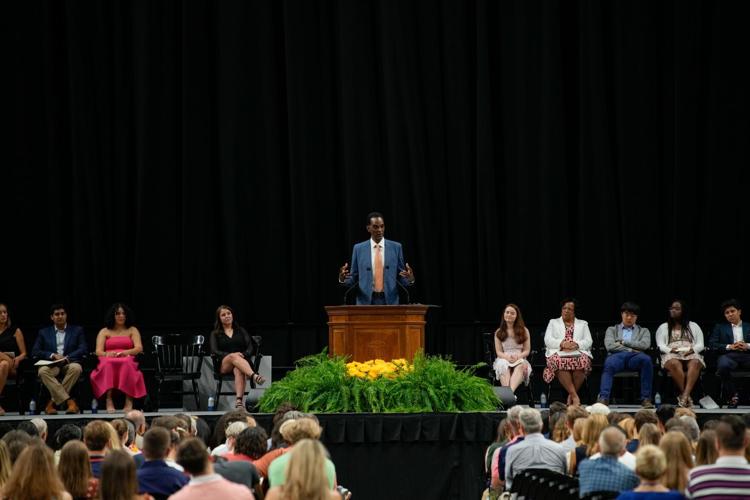 University of Virginia basketball legend Ralph Sampson addressed the 2022 class at his alma mater Friday afternoon, encouraging new graduates to stay the course, stay motivated after graduation and to stay connected to their UVa and Charlottesville roots.

Sampson, who has in the past year invested in local restaurants, including Corner landmark The White Spot and Ralph Sampson’s American Taproom, gave his address at the class Valediction, part of UVa’s Final Exercises weekend. During the event, graduating students and faculty were recognized with service and involvement awards.

Sampson told student he hopes they will stay motivated as he did, sharing his inspirational acronym “MAP” – motivation, attitude and plan.

“We all have bad days. We all have a lot of good days. But how you shape your attitude will make sure you have success and how far you go in life,” Sampson said.

Sampson encouraged graduates to stay connected with UVa alumni groups and with the Charlottesville community, no matter where they venture.

“We have this thing about UVa that makes us UVa,” Sampson said. “I am biased. I don’t think there’s any other university than can compete with UVa.”

Sampson said that, while he was heavily recruited to play basketball at UVa, some people at the university voiced their doubts in his ability to keep up with the school’s academic rigor, including a sports radio announcer.

“That motivated me to get my degree,” Sampson said. “I got a chance to see that man after I graduated and I just smiled and said I did graduate.”

Paying homage to his college career, Sampson wore the same orange and blue shoes during the address that he wore when he led UVa men’s basketball to win a national title in the 1980 National Invitational Tournament.

“I’ve only worn them twice and today is the second time,” Sampson said, saying he wanted to save them for a special occasion.

The Harrisonburg native was a heavily recruited college hoop star who took the Cavaliers to the top of the NIT, an NCAA Tournament Final Four appearance in 1981 and an NCAA Elite Eight appearance in 1983.

Sampson is the fourth-highest scorer in UVa history and holds other records. With the Houston Rockets of the National Basketball Association, he won Rookie of the Year honors in 1983 and was a five-time NBA All-Star plus most valuable player in the 1985 All-Star game.

Sampson said he faced challenges and had to make difficult choices, including being recruited by the Boston Celtics after the NIT and having to decide whether to leave UVa.

“I decided to stay because I was having fun, my parents were [financially] secure, and I was on track to graduate,” Sampson said.

Sampson also mused about his own graduation.

“We wore swimsuits and hid champagne bottles under our gowns,” he recalled. “It was not a good weather day, but it was fun as all get-out.”

The Valedictory Exercises are part of UVa’s Finals Weekend recognizing the commencement of the class of 2022. During the event, graduating students and faculty were recognized with service and involvement awards. The Final Exercises ceremonies for Arts & Sciences will take place on Saturday.

Be the first to know

Get local news delivered to your inbox!

Related to this story

The 2022 major capital plan totals $2.8 billion and includes eight new projects — the largest of which is a $350 million Institute of Biotechnology.

UVa basketball legend Ralph Sampson spoke at Valediction on Friday, telling students to stay motivated and connected to the school and the community.

UVA COMMUNICATIONS The shoes that took the UVa Cavaliers' men's basketball team to a title made their second-ever appearance on the feet of hoop legend and Valediction speaker Ralph Sampson at UVa on Friday.

Get up-to-the-minute news sent straight to your device.